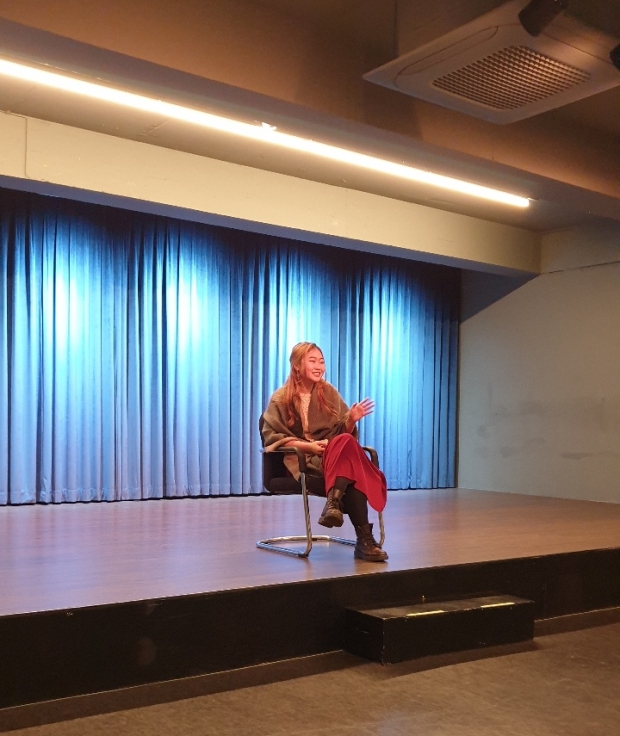 (Written June 2021. I didn’t upload it at the time because it felt so ridiculously incomplete. It still does.)

I have been occupying a new and curious space for the past few months. For convenience, I usually describe it as an acting class. But the class teaches a pretty specific technique—Meisner. And because this technique builds upon itself with concretely delineated steps of progress that have been practiced for decades, it’s been very difficult explaining what it involves to most non-theater people I know (and even non-Meisner theater people).

I’d like to think I’m pretty intentional about every community I decide to enter. And this is a community of foreign actors who have moved to Korea to pursue a career in acting. This is a community whose existence I have never thought about in my life. And now I see them twice a week, witness to the heat of their ambitions and the flurry of their ups and downs. I have taken my seat in wonder, vicariously carsick from watching them navigate their journeys with more courage and perseverance than I have ever had.

This also means I’m the odd one out. I have no intention of pursuing a career in acting, and sometimes I feel the need to justify why I have been investing so much time and energy into this class. Part of the answer is that this class is fun, and I like doing fun things. Another part of the answer is that I’m much more serious about continuing to pursue theater or film in a non-acting capacity, either in writing or directing roles, and I think an understanding of acting is crucial to both.

But I had a feeling that Meisner would be about more than just performing onstage. To act is to shift your relationship with your own emotions. It’s no casual pursuit to attempt studying something so nebulous and volatile—something you go your whole life accepting as “something that just happens”.

Growing up, my emotions never felt like a dilemma. My friends hung out without telling me, so I felt left out, so I acted cold, which escalated into a fight, which overwhelmed me, and now I am crying. External events influence my interior, which influences my behavior, which in turn influence external events. Nothing quizzical about it. But at some point, things start getting more complicated. Someone notices you’ve been irritable, and you have no idea why. A song makes you feel something you don’t quite understand. You act in ways that defy everything you thought you knew about yourself.

For how much I pine about introspection and self-knowledge, there’s still a whole uncharted universe in there. It took so much strength not to quit this class within the first few weeks, because of how it seemed to lay me bare. Under Meisner-level focus, awareness, and honesty, a tiny shift in my facial expressions could signal chronic existential fatigue. A subconscious motion of my arm was suddenly a stained-glass window into my insecurities.

The most foundational exercise of Meisner is repetition. This is when you stand face-to-face with a partner and repeat the behavior you see. Easy, right? You’re distant. I’m distant. That pulled you back. That pulled me back.

So much emotional nuance occurs in our daily lives without ever getting picked up. There’s a good reason for this: it would be absolutely exhausting to perceive everyone’s behavior all day long. It would also be scary to imagine my own behavior being perceived all day long. It’s sensible to let subliminal negative impulses and interactions remain under the surface of consciousness. One could go through six distinct emotions in a matter of seconds, but we tend not to pick it apart.

But repetition is unforgiving. It forces us to label the behavior we see, and let our internal complexity materialize. I’ve been called out on things during repetition that felt like getting slammed in the chest with a blunt object. It was terrifying at times. Cathartic at times. Shockingly refreshing all the time.

I practice acting to create compelling, entertaining stories onstage, but I also practice acting to sharpen my sense of self. I don’t expect the craft to somehow make me a more down-to-earth person. Acting doesn’t shape my personality. But it does force me to face the fact that my personality is less like a gem embedded in the core of my body, and more like layers of shifting facades that come and go in a desperate tail-chase. Acting lets me accept my performative nature with less judgement, and sometimes even assert control over it.

Last week, I ordered a copy of “On Acting” by Sanford Meisner. It only took me two pages of the introduction to confirm how I’d felt about my Meisner class all along—”when truths about one art are deep enough, they become true about all art”. That’s why I will drag myself across the city again to arrive at the little underground theater. I’ll exchange some small talk, appreciate how stunning and kind and fascinating my classmates are. Set down all my belongings and anxieties. Then I’ll take my mask off in front of others for the first time that day, and repeat.